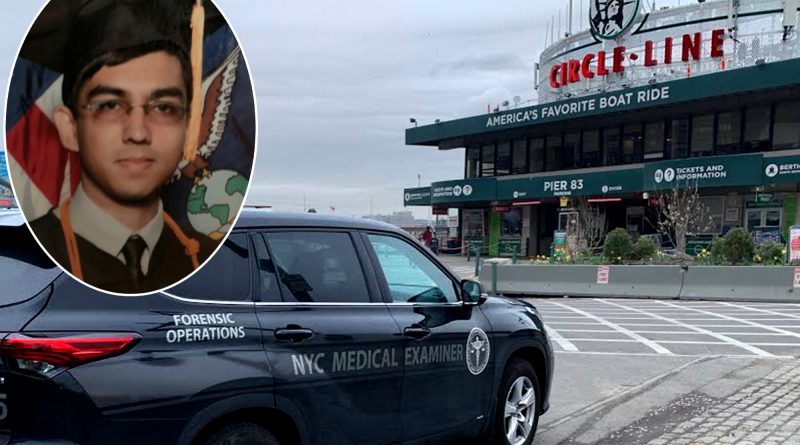 More On: deaths Florida 7-year-old shot while sleeping in home, mother injured Madoff’s lawyer admits disgraced client wasn’t perfect in most obvious statement ever Ruth Madoff is living in a $3.8M waterfront home ‘Can’t say I’m shedding a tear’: Bernie Madoff’s victims react to his death The man whose body was found floating in the Hudson River Monday has been identified as a mathematician working with cryptocurrency and artificial intelligence, according to police sources and his “devastated” family.
Sources identified the remains found off West 45th Street and 12th Avenue in Manhattan as Shuvro Biswas, 31, adding that there were no immediately apparent signs of foul play.
Biswas’ brother told The Post that he and his family were gutted by the news, noting that they’d tried in vain to get Biswas help as he battled apparent mental illness.
“We’re all extremely devastated,” said Biprojit Biswas, 34, when reached by phone. “There’s no words.
“He’s a really good guy. He’s brilliant,” he continued. “He went to Bronx High School of Science. He went on to study applied mathematics. We’re still not sure where things went wrong.”
Shuvro Biswas Family Photo Biswas said his sibling was self-employed and most recently working on a cryptocurrency security program, and online profiles show that the younger Biswas also dabbled in artificial intelligence.
He said the family started to see changes in Biswas’ demeanor over the past year, but that he largely kept his struggles to himself.
“He was always a normal, healthy person, or so he led us to believe,” the elder Biswas said. “The changes started coming only in the past year. He would say things that didn’t make much sense from time to time. He had a girlfriend and they had a bad breakup, but I don’t want to say that was the cause of everything. He didn’t really like to share much. He’s a private person.”
Biswas said his family urged his younger brother to talk to someone.
“We tried to convince him to the best of our abilities to seek professional help, but he always denied that he needed psychiatric help,” said Biswas. “He was going to a neurologist but he wouldn’t say for what.”
Shuvro Biswas’ body was found floating near the Intrepid on April 12, 2021. Peter Gerber In February, the management of the younger Biswas’ West 37th Street apartment building took him to Manhattan Supreme Court, seeking to evict him over a slew of alleged bizarre acts inside the building, including setting fires, openly brandishing a knife and smearing blood inside the elevator, court filings show.
“Defendant is a ticking time bomb who, just months into the Lease, has engaged in numerous incidents of escalating, offensive nuisance-type conduct that threatens the lives, health, safety and well-being of Building staff, Building residents and Building property,” lawyers for the building wrote in one filing.
Shuvro Biswas’ body was identified by the NYPD. Peter Gerber The filing claimed that Biswas had intentionally set a mattress on fire in his unit — while leaving an open propane tank in the apartment.
He also allegedly brandished a knife, smeared blood in the building elevator, illegally installed surveillance cameras and an alarm system, scattered bullets throughout the building and filed multiple false reports of intruders with the police — one of which saw him greet responding officers by “brandishing [a] sword,” according to the filing.
Biswas’ body was found floating in the Hudson River near the Intrepid on April 12, 2021. Peter Gerber Biswas’ brother said Biswas had explained the arson allegation as a cooking fire.
“There was a fire in his apartment. He said it was a cooking accident,” he told The Post. “The fire department came in and put it out. The department had some questions for him, but they never came back with the questions.”
The city Medical Examiner’s Office will determine a cause of death.
Additional reporting by Priscilla DeGregory